Round Eight of the VW Truck Rebate Program will be open for application January 3rd through the 27th, 2023.

Recipients for Round Two of the VW EVCS Rebate Program announced January 26, 2022.

May 20, 2021 - The Board of Minerals and Environment approved the Revisions to South Dakota's Volkswagen Beneficiary Mitigation Plan.

April 2019 - On March 5, 2019, the Governor signed HB1258, giving spending authority for the Volkswagen Mitigation Trust funds. The initial mitigation funding project will be used for school, shuttle and transit bus replacement. The Department will use VW funds from Category 10 (The DERA Option) for the project; and if the response for projects is extensive, Category 2 (Class 4-8 Buses) may also be used. Recipients and award amounts are available on the Clean Diesel Program webpage.

Background Information
On January 24, 2016, the United States and the State of California filed a lawsuit against Volkswagen alleging it had manufactured diesel cars sold and operated in the U.S. beginning in 2009 with systems intended to defeat emissions tests. These systems allowed vehicles to emit nitrogen oxide (NOx) pollution at levels that significantly exceeded the amounts allowed under the Clean Air Act.

Eligible Mitigation Actions
The Trust establishes a process to administer the funds, and identifies 10 categories of mitigation actions that will be eligible for funding along with reimbursement rates for these actions. Eligible actions focus on reducing nitrogen oxide pollution from primarily diesel-powered trucks and buses. Generally, the types of approved actions include replacing older diesel-powered trucks, buses, industrial vehicles and other powered equipment with new, lower emissions equipment. Categories of eligible vehicles and equipment are as follows:

State Allocation
South Dakota expects to receive $8.125 million dollars from the Environmental Mitigation Trust. The funds are to be disbursed within 10 years, with no more than one-third disbursed in the first year or two-thirds disbursed in the first two years. A Beneficiary Mitigation Plan must be developed that summarizes how the State allocation of mitigation funds will be distributed among the various eligible mitigation actions to reduce nitrogen oxide emissions. The Plan will be based on eligible mitigation actions that can produce the greatest air quality benefit in terms of nitrogen oxide emission reductions, reduced public exposure, and the promotion of clean vehicle technologies. The Plan will be developed through a public process, with multiple opportunities for public comment.

The court has approved a Trustee who will be responsible for administering the Trust. The State and Tribe Trust Agreements have been executed by the settling parties and filed with the court. As a result of this filing, the Trust Effective Date has been set to October 2, 2017. The Trust Effective Date kicked off the timeline for each state to take the required actions to qualify to receive funds. Within 60 days of the Trust Effective Date, South Dakota needed to submit a Certification Form in electronic format and by mail, signed by the Governor, explaining how South Dakota qualifies to be a Beneficiary under the Trust. This form was submitted November 21, 2017. On January 29, 2018, South Dakota was designated as a beneficiary to the State Trust. The Notice of Availability of Mitigation Action Funds was submitted to the federal agencies on February 8, 2018.

On May 20, 2021, The Board of Minerals and Environment approved Revisions to South Dakota's Volkswagen Beneficiary Mitigation Plan. Click for the comments received during the 30-day public comment period and DANR's response to those comments. 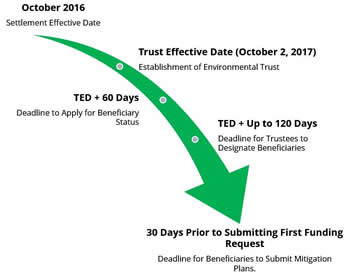