Water rights in South Dakota are managed by:

This information is used to determine whether water is available to meet existing and proposed water uses and to manage water resources during drought conditions. 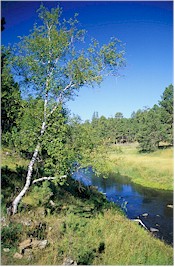 Other areas of service include:

Who owns the water in South Dakota?

According to South Dakota Codified Law (SDCL) 46-1-3, all water within the state is the property of the people of the state but the right to the use of water may be acquired by appropriation as provided by law.

What is a water appropriation?

A water appropriation is an authorization granted by the state Water Management Board to make a private, beneficial use of the state's water resources. An approved appropriation authorizes use of either ground or surface water and is issued as either a water right permit for a new water use or as a vested water right for an existing water use predating March 2, 1955.

Who needs a water appropriation?

A permit to appropriate water is needed for all water uses in South Dakota except for certain domestic uses of water. Domestic use is the highest use of water and takes precedence over all appropriative uses. Examples of domestic water uses are:

In general, domestic uses may not exceed either 25,920 gallons per day (gpd) or a peak pump rate of 25 gallons per minute (gpm). Any domestic use in excess of either 25,920 gpd or 25 gpm requires obtaining a permit to appropriate water. For additional information about who needs a water appropriation, please refer to the web page Using Water in South Dakota.

How do I apply for a permit to appropriate water?

An application to appropriate water needs to be filed on forms supplied by the chief engineer. Information needed on the application includes the water source, amount of water to be claimed, diversion point locations, annual period during which water may be used and type of use. The application also needs to include a map of the project, the application fee, and supplemental information such as the storage capacity of impoundment structures or a well driller's test hole or well log, when applicable. Several other types of applications are also processed by the Water Rights Program, including applications to:

The same procedure is used for processing each type of application. Upon receipt of a completed application, the Water Rights Program prepares a report and a recommendation is prepared by the chief engineer to either approve, deny, or defer action on the application. If recommended for approval, qualifications are often attached restricting water use under certain conditions and to require annual reporting of water use. A permit to appropriate water may be issued only if:

Proponents and opponents may be represented by legal counsel, present evidence, and cross examine. The board may accept, reject, or modify the chief engineer's recommendation and issue the water right permit or vested water right subject to terms, conditions, restrictions, and other limitations to protect the public interest. After a board decision is made, the board's attorney prepares findings of fact, conclusions of law, and a final decision concerning the issue. Following a comment period, the board considers adopting the proposed findings, conclusions and final decision. Final decisions of the Board may be appealed to the circuit court and state Supreme Court. A flow chart of the water right permit process is shown in the South Dakota Environmental Permitting and Regulation Guide.

How long do I have to develop my water appropriation?

Upon approval of the application to appropriate water, a water right permit is issued by the chief engineer on behalf of the Water Management Board. The permit includes information supplied on the application, any qualifications attached by the chief engineer or Water Management Board, and the time periods during which the project must be constructed and water placed to beneficial use. The statutory length of time allowed for construction of works is five years from the date of approval and an additional four years to place the water to beneficial use. A water right permit may be amended to extend the construction period or the time period to place water to beneficial use, for a reasonable time, but only due to: 1) delays caused by physical or engineering difficulties, 2) operation of law, or 3) other exigent circumstances identified by the board. An application to extend the construction period should be filed prior to expiration of the current construction period.

Do I notify anyone after developing my water appropriation?

Can I make changes to my water appropriation?

Can I lose my water appropriation?

A water right permit may be cancelled if the water use project is not constructed within the authorized construction period. In addition, failure to place water to beneficial use as authorized by a developed water right permit or right may result in cancellation due to either forfeiture or abandonment, or both. Water needs to be placed to beneficial use at least once every three years or all or any part of the water not used is subject to cancellation. However, there are legal excuses for not using water which suspend the period of nonuse of water: 1) unavailability of water to satisfy a permit or right, 2) legal proceedings which prevent the use of water, 3) use of water under existing climatic conditions would result in a waste of water, and 4) participation in an acreage reserve or other federal production quota program. In order for a permit or right to be cancelled, a hearing must be held by the Water Management Board. Any forfeited water reverts to the public and becomes unappropriated water, unless the source is fully appropriated.

Each year the administrative section sends out the irrigation water use questionnaire to approximately 2,000 irrigators across the state. This water use information allows the water rights program to determine whether additional water is available for use when someone files an application for a new appropriation.

The engineering section includes safety of dams inspections, establishment of ordinary high and low water marks, plugging of uncontrolled flowing wells and modeling activities. All high hazard dams, dams where loss of life may occur if the dam fails, and all state owned dams are inspected. Also, the Water Rights Program participates in the Association of State Dam Safety Officials (ASDSO) and administers the Safety of Dams rules.

Ordinary high and low water marks are determined for public lakes following field investigations and preparation of a report with recommendations. The marks establish what lands around lakes can be used by the public. Investigations of uncontrolled flowing wells are conducted to determine if the well can be controlled or if the well must be plugged to prevent waste of water. In addition, the Water Rights Program provides technical assistance to plug abandoned wells or control wells and in some cases prepares the contract and awards bids for plugging a well. Some modeling of ground water and surface flows is completed using HEC I, HEC II, Dambreak and USGS ground water models.

The surface water section oversees the monitoring and regulation of the surface waters of the state. Monitoring is done in cooperation with the US Geological Survey through use of 52 stream gauging stations located throughout the state. Real-time stream flows and historical flows are available through the US Geological Survey website. Hydrologic analyses of stream systems are conducted based on stream gauging station data to determine if water supplies are available for additional appropriations. Flooding issues along rivers or lakes are investigated and, if requested by a county, technical assistance may be provided ondrainage projects. This section is also responsible for review of Missouri River issues involving operation ofthe mainstem reservoirs by the US Army Corps of Engineers.

Climate played a major role in determining the water rights laws of South Dakota. As shown on the map of the United States, the western United States tends to be semi-arid to arid while eastern portions of the United States are typically wetter. This change in precipitation patterns falls along the 100th Meridian. South Dakota provides a vivid snapshot of the differences between the western and eastern United States. Anyone driving across South Dakota can see a striking difference between eastern and western South Dakota. Perhaps something less obvious than the change in scenery is the effect of water on attitudes. Everyone knows water is important, but the perceived value of water quickly increases when there is less of it available to use. 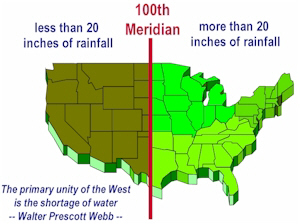 South Dakota, like our western neighbors, needed a water management system that would equitably distribute our often scarce water resources. In the eastern United States, where water is more plentiful, a riparian water use system developed. In a riparian system you have the right to make reasonable use of the water accessible to you. However, in the western United States, a system developed based on the "Doctrine of Prior Appropriation." This prior appropriation system allows water users to construct works to move water over long distances to where the water is needed and provides for assignment of a water use priority date. "First in time, first in right" became a common identifier for this priority date based system since the most senior water right holders have first call on any water that is available. Since the investment to construct works to move water long distances is considerable, it was and continues to be important to protect that investment. Appropriately, given the location of the 100th Meridian, South Dakota became a hybrid state with a both a riparian system and prior appropriation system. The riparian system is used primarily for small domestic water uses while the doctrine of prior appropriation is used for managing all other water uses. Domestic riparian water uses take preference over other water uses and the doctrine of prior appropriation is the means now used to protect water users and manage South Dakota's water resources.

In 1889 South Dakota became the 40th state, but the doctrine of prior appropriation actually predates South Dakota's statehood. The Dakota territorial legislature enacted legislation in 1881 establishing a procedure to "locate" surface water Map of South Dakota with state flag overlayrights. A claimant was required to file a location certificate with the register of deeds, post a notice near the point of diversion, and begin construction within a certain period of time. In 1907, the state legislature affirmed the doctrine of prior appropriation by enacting legislation authorizing the state engineer to administer appropriation of water.

A major addition to the water rights laws occurred in 1955. Legislation was enacted specifically identifying ground water as being subject to the doctrine of prior appropriation. In addition, a provision was inserted allowing anyone to claim a vested water right for water uses predating March 2, 1955. The 1955 legislation also transferred the authority to issue water right permits from the state engineer to a citizen's board with a chief engineer making recommendations to the board. This citizen's board is now known as the Water Management Board and consists of seven members appointed by the Governor.

Through the years many other changes to the water rights laws have been made to protect and improve management of our water resources. However, even with these changes, the same underlying principles implemented at the beginning of the 20th century are still in place in the 21st century.