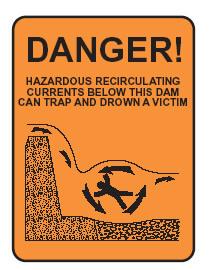 Low head dams can be found on river channels in South Dakota including the Big Sioux, James and Vermillion Rivers. These structures may not look particularly dangerous but numerous lives lost at low head dams testify otherwise. Too often, "Drowning Machine" is an accurate name for these dams.

Low head dams create a pool of water on the upstream side of the structure with water flowing uncontrolled over the dam. From upstream a low head dam can be difficult to spot and, even if you know the dam is there, the water flow over the dam may not appear dangerous and perhaps even "inviting."

What is not understood or seen is the danger just below the low head dam. As water plunges over the dam a recirculating current is created. The plunging water pulls water near the surface back towards the dam creating a continuous circulation of water which traps anything or anyone. Even wearing a personal flotation device will NOT prevent you from being pulled under the water.

These dams are also dangerous if approached from the downstream side. The current flowing back towards the low head dam can pull the unsuspecting into the recirculating zone. Once in the recirculating zone a boat, kayak, canoe or flotation device will be pulled into the water plunging over the dam and forced under. Any vessel or person can be trapped for hours in the turbulence below a low head dam.

Don't be deceived by the amount of flow over a low head dam. Higher flows are certainly more dangerous but even low flows create a recirculation zone that may prove fatal. The only safe option is to portage around a low head dam. Exit the water well before you reach the low head dam and re-enter far downstream of the turbulent zone below the dam -- say 100 yards or so downstream.

In an effort to bring more awareness of the dangers posed by these structures Minnehaha Emergency Management, Sioux Falls Fire and Rescue, and the SD Dept of Game, Fish and Parks have teamed up to create the following 9:25 minute video: