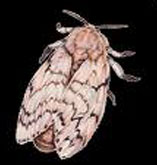 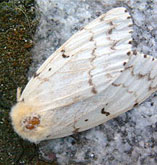 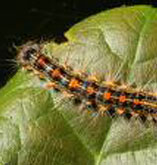 Reproduction: Egg masses are typically laid on branches and trunks of trees but may be found in any sheltered location. Hatching of gypsy moth eggs coincides with budding of most hardwood trees.

Dispersal: Natural dispersal occurs when newly hatched larvae hanging from host trees on silken threads are carried by the wind for a distance of up to about 1 mile. Artifical dispersal occurs when eggs are transported thousands of miles from infested areas on cars, recreational vehicles, firewood, household goods and other personal possessions.

Origins: The gypsy moth was introduced into the United States in 1868 by a French scientist living in Massachusetts. The native silk spinning caterpillars were proving to be susceptible to disease. So Trouvelot brought over gypsy moth eggs to try to make a caterpillar hybrid, that could resist diseases. When some of the moths escaped from his lab, they found suitable habitat and started to multiply. Gypsy moth is now one of the most notorious pests of hardwood trees in the eastern United States.

Hosts: Gypsy moth larvae generally prefer oaks, but may feed on several hundred different species of trees and shrubs, both hardwood and conifer. The gypsy moth avoids ash trees, tulip-tree, American sycamore, butternut, black walnut,catalpa, flowering dogwood, balsam fir, cedar, American holly and shrubs such as mountain laurel and rhododendrons, but will feed on these in late instars when densities are extremely high.