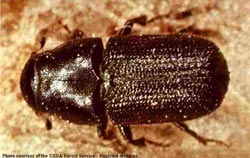 The mountain pine beetle (Dendroctonus ponderosae) is a small insect that lives most of its life in the inner bark of pine trees. The adult beetles are black to rusty brown and 1/4 inch in length. They fly from infested trees to new host trees in late June or July. Once they have located a favorable living host pine, the adults tunnel beneath the bark to lay eggs. After the eggs hatch the young, known as larvae, feed within the tree until the following spring when they pupate, a resting stage, for several weeks before becoming adults. The adults emerge from the dead, yet often still green, host and seek a new tree to begin the cycle again.

The beetles can colonize trees in large numbers. The tunneling beneath the bark by the adult beetles and their larvae harms the tree by disrupting the movement of food, produced by the needles, to the roots. The adult beetles also can carry a blue-stain fungus from tree to tree. This fungus stops the movement of water from the roots to the needles. The combination of these two factors results in the tree’s death.

Where Is the Mountain Pine Beetle Found?
The mountain pine beetle is found throughout western North America from British Columbia to northern Mexico. It can be found throughout the Black Hills.

What Tree Species Does the Mountain Pine Beetle Attack?
The most common host in the Black Hills is ponderosa pine. This tree occurs on more than 1 million acres of forestland in western South Dakota. Ponderosa pine is also extensively planted in shelterbelts and landscapes. Ponderosa pine can be separated from other pines by its bundles of needles in two’s and three’s (most other pine trees will have needles in bundles of only two or only three). The needles are typically 5 to 11 inches long.

Lodgepole, sugar and western white pine, though far more common in western states, are also susceptible wherever they are found. The pines we frequently use in the ornamental landscape, Scots (Scotch) and Austrian pine, are generally not hosts due to their smaller size and distance from mountain pine beetle infestations. However, these trees are highly susceptible to attack and large trees near infestations are vulnerable. Spruce, fir or Douglas-firs may be attacked if in the vicinity of infestations but these attacks are rarely successful.

Why Is There So Much Concern About This Insect?
Mountain pine beetle (MPB) is native to the Black Hills and has probably inhabited the Hills as long as there has been a pine forest. This insect, as with many other insects, goes through cycles where they become very abundant and then relatively rare. Only stressed or weakened trees, such as those struck by lightning, are colonized when the beetle population is very low. However, the beetle population increases roughly every ten years, and during this time the beetles will colonize healthy trees too. These outbreaks last about ten years, after which the beetle population once again declines. Forest health staff continues to collaborate with partners towards creating and maintaining forests that are resilient to large-scale disturbance and will continue to assist private landowners, homeowners, and other state agencies with their MPB and other bark beetle problems through technical assistance.

The first recorded outbreak in the Black Hills occurred in the late 1890s. An estimated 10 million trees were killed during this outbreak. Approximately five outbreaks have occurred since that time, though none have reached the same magnitude. The outbreak in the early 1970s resulted in the loss of more than 440,000 trees. The most recent mountain pine beetle epidemic in the Black Hills lasted from 1996 to 2016 and resulted in approximately 450,000 acres affected to varying degrees. Severe outbreaks can increase fire hazard as well as stream flow. The snags, however, are beneficial as habitat for cavity-nesters.

How Can I Tell If Mountain Pine Beetle Is Infesting My Trees?
During outbreak conditions, all trees – weakened and healthy – are susceptible. The summer that a tree is attacked it will appear green and healthy. The first signs of the attack will be noticeable by late summer.

At this point the trees are usually beyond recovery. The following spring the needles on these attacked trees will turn a yellow to a bright red. The wood will show blue-staining by the fungus Ceratocystis montia. After the adult beetles emerge, the dead trees turn a dull red, becoming gray the following year. There are other insects and disorders that can be confused with some of the symptoms and signs of mountain pine beetle colonization.

Consult with a professional forester or South Dakota certified arborist to be sure the problem has been correctly identified.

What Can Be Done to Manage This Insect?
For strategies that can be used to manage this insect in both forest and residential areas please see the bulletin Management Strategies for the Mountain Pine Beetle also available from a forester at your nearest South Dakota Resource Conservation and Forestry Division office.

*The use of trade names is for reader convenience and does not imply product endorsement.

The South Dakota Resource Conservation and Forestry Division is an equal opportunity service provider. Services are provided to all persons without regard to race, color, religion, gender, age, disability, national origin or political beliefs. To file a complaint of discrimination contact the Director, South Dakota Human Rights Division, 118 West Capitol Ave, Pierre, South Dakota 57501 or call (605)773-4493 (voice or TDD). The division is a recipient of Federal funds.