Historical Background. Abandoned wells exist throughout South Dakota and tap into every principle aquifer in the state. These are the same aquifers that are relied on today for much of the drinking water used in the state. While the actual number of abandoned wells is not known, it is possible to make some reasonable estimates of the number of abandoned wells. In 1910, South Dakota had approximately 78,000 farms which reached a maximum of 84,300 farms in 1932. Since that time, farm numbers have declined steadily to about 31,700 today. Therefore, South Dakota has lost approximately 52,600 farms that likely had at least one well which may now be abandoned. Aside from the reduction in the number of farmsteads, other factors have also contributed to the creation of abandoned wells such as the development of rural water systems and rural electrification. Abandoned wells are not only a problem on farmsteads. Municipalities have also hooked up to rural water systems or constructed replacement wells and have not properly plugged their old wells which gradually fall into disrepair. Many people have good intentions to maintain an old well as a backup or standby well, but typically these wells never get used again and are forgotten over time. When this occurs, the well becomes a potential pollution source to everyone using the aquifer and a potential liability to the well owner. Whoever owns the property on which the abandoned well is located is deemed to be the well owner.

Locating Abandoned Wells. Abandoned wells may be located anywhere but there are some obvious indicators of the presence of abandoned wells such as windmills, hand pumps, abandoned farmsteads, or a simple pipe sticking out of the ground. Wells were oftendrilled near outbuilding and were housed in small sheds or sometimes wells were located in the basement of a home. Perhaps not so obvious are the inhabited farmsteads that are now served by rural water or farms that have had newer wells drilled to replace the original well which has since been abandoned. The same can be said of cities and towns in South Dakota that have hooked to rural water or drilled replacement wells. Other indicators of the presence of an abandoned well are depressions supporting aquatic vegetation, such as cattails, in an otherwise dry area. Often, wells were hand dug and are large diameter wells constructed of concrete, wood, bricks, rock, or other materials around the perimeter of the well. In some instances, the abandoned well is housed within a large diameter pit which may be several feet deep.

Other information sources for locating abandoned wells include: 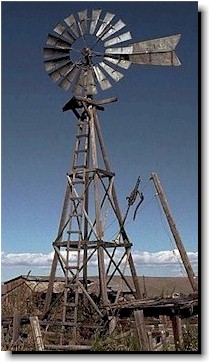 Cross Contamination of Aquifers. A well which penetrates more than one aquifer may allow water from one aquifer to contaminate another aquifer if the well is not properly constructed. Water may leak along the outside of the well casing if the well is not properly sealed or the casing may deteriorate and develop holes which allows water movement inside the casing. In either event, the water from one aquifer mixes with one or more other aquifers which may cause problems. Water of poorer quality may enter another aquifer and reduce the water quality as well as pollutants moving from a contaminated aquifer to an aquifer which, unfortunately, is about to become contaminated.

Reducing Artesian Head Pressure. Abandoned wells from which water flows over the land surface or that leak water underground from one aquifer to another aquifer will reduce the head pressure in an aquifer. As a result, water levels in nearby wells will be lowered and wells that once flowed may need to be pumped to get water from the well. It may not even be possible to place a pump in a well that no longer flows due to the size of the well casing. In addition, water flowing from an abandoned well may result in a waste of water which is prohibited by state law in SDCL 46-1-4.

Safety Hazards. Many abandoned wells are not marked or covered. In some instances the well casing or a pit in which the well is located is large enough for a person or animal to fall into and become seriously injured or killed. While such occurrences are rare, they do happen. Fortunately, these types of accidents are entirely preventable with proper plugging of the well.

If you have questions or need more information, please contact the Water Rights Program at 605 773-3352 or email us or view a report (Adobe Acrobat PDF file) entitled "Abandoned Well Sealing Demonstration Project." Thank you for helping to protect South Dakota's water resources.

Acknowledgement: Most of this abandoned well information consists of excerpts from a publication (FS 891 - October 1993) entitled, "Plugging Abandoned Water Wells" prepared in cooperation with the South Dakota State University Cooperative Extension Service, East Dakota Water Development District, and the Water Rights Program of the Department of Environment and Natural Resources.